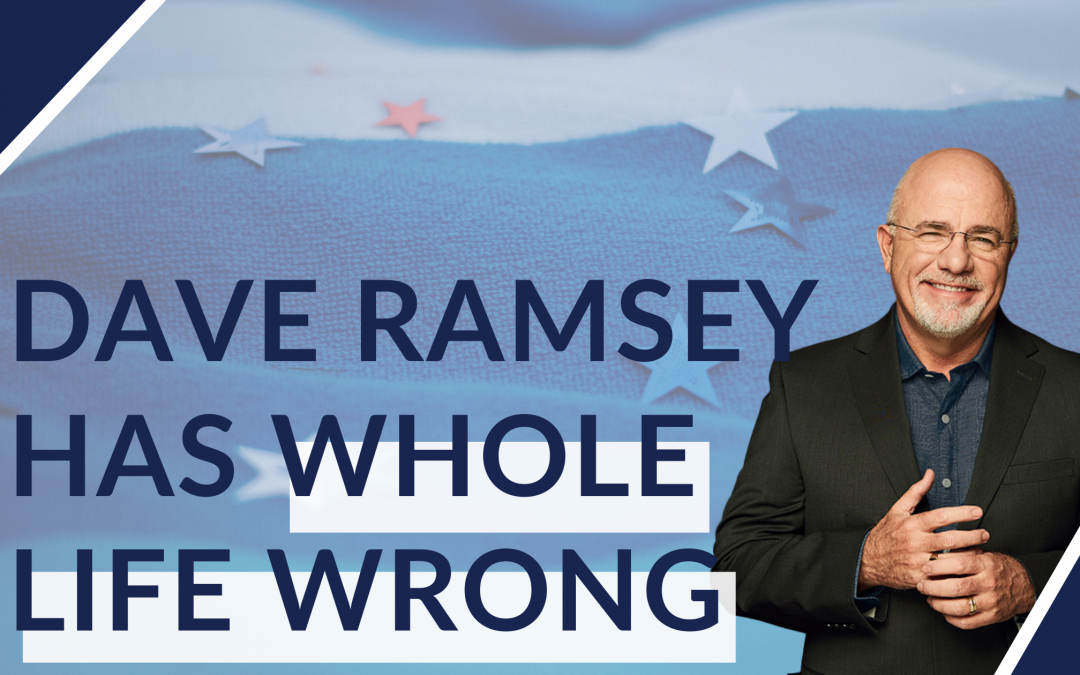 Dave Ramsey is well known as an influential radio talk show host in which he gives his opinion on the best ways to get out of debt, save more money, and invest in the future. His advice has helped thousands of Americans get in a better position financially, which I find incredibly admirable. However, if there’s one thing Dave Ramsey has completely wrong, it’s his take on whole life insurance.

Ramsey often claims that whole life insurance is too expensive, doesn’t perform well, and is better to buy term insurance and invest the difference. Another common claim is that you don’t need insurance once you retire. However, many retirees are retiring with the need and want for insurance; whether to replace income for their surviving spouse, leave behind a financial gift to their loved ones, or use the many other additional benefits permanent insurance can provide. Here, I’ll break down why the conventional wisdom of buying term and investing the difference doesn’t work for many people and why whole life insurance can be a better alternative.

What Is Term Insurance?

Term insurance is inexpensive because it’s not meant to payout. In fact, according to a Penn State University study, only 1% of policies ever pay out a claim. If 30 – 40-year-olds purchase a term insurance policy, they will almost always outlive the policy, which means that they have paid a premium for 20 or 30 years without anything to show for it! So, although a healthy 35-year-old man can purchase a $500,000 20 year term insurance policy for approximately $50 per month, in the 21st year, he has nothing to show for the $12,000 he just spent.

Most of our clients face the harsh reality when it comes to term insurance because once the term policy has expired, will they still have a need or a want for insurance coverage? The premiums become too expensive (yes – even for a term policy!), or they are no longer healthy enough to qualify for coverage.

What If Dave Followed His Own Advice on Whole Life Insurance?

To take this example a step further, what if the healthy 35-year-old followed Dave Ramsey’s advice further and invested the difference between what he spent on his term policy and what he would have spent on a whole life policy?

According to the 2019 Quantitative Analysis of Investor Behavior report by the independent and unbiased investment performance rating firm, DALBAR, the typical investor does not see the 9%, 12%, or higher returns that Ramsey claims you can get. The typical investor has received a 3.38% annual return over the last 20 years.

Let’s Break It Down

Our 35 year old would grow his investment account to $154,229 over 20 years. Not too shabby, but is it worth the ups and downs of the market?

Well, let’s see how he would have done if he put his $500 each month towards the expensive and low performing whole life policy Dave Ramsey advises against.

Not only has he recaptured his insurance costs in the cash value of his policy, but he can also choose not to pay any additional premiums and will continue to grow his cash value and death benefit for the future.

What’s more, he can access his cash at any time and for any reason, income tax-free and without fees or penalties. If he borrows against his cash value, he’ll earn the same growth annually as if he had not touched it at all.

Plus, if he has a major medical event, becomes chronically ill, or terminally ill, he can access a portion of his death benefit tax-free to help pay for his medical expenses.

So, is it worth it to buy term and invest the difference? It could be short term. But if you’re looking to build long-term, lasting wealth, we think Dave Ramsey is all wrong.

Our Professionals Can Help

Our 100-Year Savings Solution Professionals are real people and are ready to help you create a financial strategy that will allow you to simplify your real estate investment business immediately. Schedule a free, no-obligation consultation with our team today.

Our Professionals Can Help

Planning for your financial future can be challenging, but our 100-Year Savings Solution Professionals are ready to help you create a financial strategy that will protect your family, now and in the future. Schedule a free, no-obligation consultation with our team today.